William L. Zillman, Esq.
Bill Zillman was admitted to the California bar in 1979. He received a Bachelor’s degree in Economics from the University of California at Berkeley in 1970 and his Juris Doctor degree from the University of California, Hastings College of the Law in San Francisco. He is a graduate of the University of Washington Pacific Coast Banking School. Mr. Zillman’s career includes more than thirty-five years of experience in all phases of commercial banking at Bank of America and Bank of the West. He served in various capacities in the retail banking, commercial banking, risk management and legal groups. He was the General Counsel and Corporate Secretary of Bank of the West from 1986 until 2004. He was responsible for all legal functions within the bank. He supervised a legal staff of twelve attorneys providing legal services to all units of the bank across a nineteen state footprint. From 2005 until his retirement from Bank of the West in February 2008, he headed the Bank of the West Wealth Management Group, a division that provided investment and fiduciary services to more than 2000 individual, non-profit and corporate clients. Mr. Zillman’s practice primarily involves services to financial institutions including legal and regulatory compliance, risk management, corporate governance and wealth management issues. Mr. Zillman is a member of the State Bar of California and the Santa Clara County Bar Association 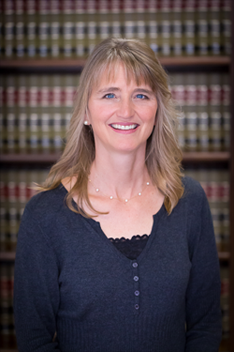 Kimberly Wrenn
Kimberly Wrenn has been a paralegal in excess of 29 years and has worked for Robertson & Lewis since its inception in 1992. She graduated from Santa Clara University’s paralegal program in 1988 wherein she received her Paralegal Certificate. Kimberly Wrenn also attended San Jose State University working towards a Political Science major. Kimberly Wrenn is a current member of Paralegal Association of Santa Clara County (“PASCCO”). As a paralegal, Kimberly Wrenn performs planning, development and management of cases; conducts legal research, fact gathering and retrieval of information; drafts and analyzes legal documents; collects, compiles, and utilizes technical information to make an independent decision and recommendation to the supervising attorney.